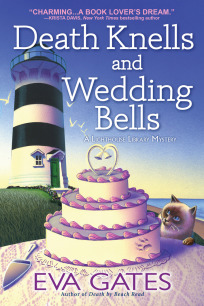 When her former director is found dead in the water, librarian Lucy Richardson will have to get to the bottom of the mystery before the killer ends her tale.

It's summertime in the Outer Banks of North Carolina and Bertie James's college class is having their 40th anniversary reunion. The opening night reception is held at the Lighthouse Library and Lucy and her colleagues have assembled an exhibit of library artifacts showing how libraries have changed over the years. After the reception, some of the women take a walk down the boardwalk to the pier, using flashlights to illuminate the dark path, but what's scarier than the dark is finding the former director of the Lighthouse Library floating lifeless in the water.

Helena Sanchez, the former director, wasn't much loved and spent the party being rude to almost everyone there. As a result, Lucy finds herself in deep water as she rocks the boat, questioning several suspects. But she'll have to batten down the hatches and fast before she's left high and dry...and right in the killer's crosshairs.

A Death Long Overdue is now available at your favourite bookstore

The Tea by the Sea Mysteries: A New Series from Vicki!

In this charming new cozy mystery series from nationally bestselling author, Vicki Delany, a New York City expat-turned-Cape Cod tea shop owner must solve the murder of a local real estate developer to help her feisty grandmother out of a jam . . .

As the proud proprietor and head pastry chef of Tea by the Sea, a traditional English tearoom on the picturesque bluffs of Cape Cod, Roberts has her hands full, often literally. But nothing keeps her busier than steering her sassy grandmother, Rose, away from trouble. Rose operates the grand old Victorian B & B adjacent to Lily’s tea shop . . . for now. An aggressive real estate developer, Jack Ford, is pushing hard to rezone nearby land, with an eye toward building a sprawling golf resort, which would drive Rose and Lily out of business.

Tempers are already steaming, but things really get sticky when Ford is found dead at the foot of Rose’s property and the police think she had something to do with his dramatic demise. Lily can’t let her grandmother get burned by a false murder charge. So she starts her own investigation and discovers Ford’s been brewing bad blood all over town, from his jilted lover to his trophy wife to his shady business partners. Now, it’s down to Lily to stir up some clues, sift through the suspects, and uncover the real killer before Rose is left holding the tea bag.

Gemma Doyle and her friends travel to London for a Sherlock Holmes convention--but will Gemma's father take the fall for a felonious forger's fatality?

The 6th of January is Sherlock Holmes's birthday, and lucky for Gemma Doyle, January is also the slowest time of the year at both the Sherlock Holmes Bookshop and Emporium, and Mrs. Hudson's Tea Room. It's a good time for Gemma and her friends to travel to England for a Holmes Convention. For Gemma, the trip provides an opportunity to visit her parents, Jayne Wilson is excited about seeing all the sites London has to offer, and Ryan Ashburton just wants to spend some time with Gemma. But the trip is immediately derailed when Gemma's father Henry recognizes his brother-in-law Randolph Denhaugh, who disappeared more than thirty years ago on the night he stole a valuable painting from his own parents.

Henry, a retired detective with Scotland Yard, has been keeping tabs on the man's career as a forger of Old Masters and he warns Randy to stay away from his family. It's up to Gemma, with the help of her friends, to plunge into the "lowest and vilest alleys" of London to save her father from prison.

The Year Round Christmas Series by Vicki Delany

In the town of Rudolph, New York, the Christmas season should make spirits bright, but as the year comes to an end, so does a life, in the fifth installment of this charming cozy mystery series.

Christmas has arrived in Rudolph, New York, and Merry Wilkinson is looking forward to a much needed rest. But before that can happen, Luanne Ireland walks through her door. Luanne had asked Merry to help make decorations for her wedding, but has suddenly moved the wedding months earlier and is now demanding that everyone follow her lead, regardless of the cost.

But that cost is much higher than anyone anticipated. When Luanne's fiancé is found murdered at their proposed wedding venue, Merry resolves to restore peace and calm to the community of Rudolph. But the closer she gets to the killer, the more personal the case becomes, and Merry begins to worry that a death knell could ring in the New Year.